Our history so far.

The Parish of Bognor Regis and Slindon is an active community with around 1400 people at Mass every Sunday, along with those Catholics in our area who do not worship with us regularly. It is a very mixed community covering a wide area from high on the beautiful South Downs National Park in the North to the busy seaside resort of Bognor Regis on the South Coast with many surrounding villages in between.

In recent years our community has been very blessed and enriched by the arrival of many new parishioners from other parts of the world. Included in this, we have a vibrant Polish community with their own Local Catholic Mission led by resident chaplain Fr. Antoni Prosowicz and have a bi-monthly Tagalog Mass for the local Filipino community. 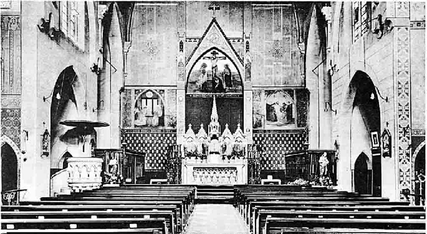 The church of Our Lady of Sorrows
The story of Our Lady of Sorrows begins in 1880 when the Servite Friars came to Bognor at the request of the Archbishop of Southwark, since at the time the archdiocese counted Sussex in its jurisdiction.
Within a year of their arrival the foundation stone of the church and priory had been laid, on the 26th October 1881. The church dedicated to Our Lady of Sorrows, was solemnly blessed and opened on 16th August 1882. At that time it consisted of just the nave, with the recessed side chapels and baptistery opening off it. The architect, Joseph S. Hansom had planned a large church and adjoining priory in the prevailing 19th century Gothic Revival style; a lack of funds prevented the full realisation of the scheme and a temporary gable wall was built across the nave to allow for later extensions.

The photograph shows the interior of Our Lady of Sorrows as it was in the 1880’s. As can be seen there is much ornate decoration (now lost) and in particular the wall behind the High Altar had been painted by the first Parish Priest Fr. Simoni with scenes from the life of Our Lord and our Blessed Lady. It is worth noting the cabin to the left of the sanctuary which was used as the sacristy and stands in the space now occupied by the side door. To the far right of the picture we catch a glimpse of the highly decorated wall indicating the attention given to the side chapel at the time dedicated to Our Lady of Sorrows.
It was not until 1955 that the church was eventually extended and completed with a larger nave, generous sanctuary with vaulted ceiling, retro choir for the recitation of the Servite Friars daily office, and a new Lady Chapel. Although Fr. Simoni’s wall paintings were lost we are daily reminded of his skill as an artist when we reflect on the beautiful paintings on the reredos. The church of Our Lady of Sorrows was consecrated on 11th May 1965. Further major adaptations were made to the fabric of the church in 1985. The sanctuary floor was raised and extended forward into the nave. The old High Altar was removed leaving the Reredos to surround a new tabernacle.  A new marble Altar and matching Ambo were installed on the sanctuary together with a new baptismal font on the north side of the nave and a glazed screen forming a narthex beneath the organ loft.
After 113 years service to the local Catholic community, in 1994 the Servite Friars handed the parish over to the Diocese of Arundel and Brighton. Our first diocesan Parish Priest was Fr. Ian Doyle assisted by Fr. Dennis Barry.
Shortly after their arrival the parish joined forces with the adjoining rural parish of Barnham and Slindon creating the large and diverse community we are today.

The church of St. Anthony of Viareggio, Rose Green
St. Anthony’s started life as a bungalow called Roughlands belonging to a Mr Brown who, upon his death in 1961, bequeathed it to the Servite Friars for the construction of a church. The building was gutted and extended to form a much needed Mass centre at the western end of the parish where considerable building development was taking place. The renovation was planned and overseen by Fr. Anselm Hislop O.S.M., a long time priest in the parish, and included a free standing tri-form tower, considered at the time to be very “avant-garde”.
The church was officially opened by the Right Reverend Cyril Cowderoy, Archbishop of Southwark, on 6th May 1963. At least one local parishioner remembers that a coach was laid on to take Bognor parishioners out to Rose Green for the opening, perhaps an indication of the degree of car ownership at the time?
The St. Anthony’s community rapidly grew and tales exist of side windows being opened in the summer to allow the burgeoning numbers to be accommodated. This led to a temporary lean to porch being added which, as is the way with such things, remained for many years until the church was substantially renovated with the creation of the new meeting room and new entrance in date.

The church of St. Richard of Chichester, Slindon
Slindon has a long history of Roman Catholicism. Slindon Manor was part of the See of Canterbury as long ago as 1106. St Anselm and many Archbishops of Canterbury and other holy figures stayed here, including probably Saint Thomas a Becket, Saint Thomas More and the  famous Cardinal John Morton who was Chancellor of  England and (in)famous for ‘Morton’s Fork’.
Morton’s Fork a mediaeval Catch 22: If you live  lavishly you must have plenty of money and pay your taxes. If you live simply you must be saving your money and can also pay your taxes. Even when the Catholic religion was proscribed from the time of Elizabeth I, the family in Slindon House (now Slindon College) remained Catholic and secret services were held there. There are many stories of harbouring priests, secret chapels and priest holes and even of tunnels to nobody knows quite where!
owever, following the laws which permitted Roman Catholics to practice their religion again, the Earl of Newburgh, landowner of the Slindon estate who died in 1814, left land and money in his will to establish a Roman Catholic chapel and a priest’s house in Slindon. His widow Anne, Countess of Newburgh, preferred to continue to worship in the chapel at Slindon House and it was not until after her death that the present church was built by her heirs, the Lesley family from Scotland.
The Slindon Trust was established in 1863, the foundation stone was laid in September 1864 and the church was completed in November 1865.
The small painted crosses on the inside walls of the church are consecration crosses which are applied in a special service of consecration when the parish is free from any debts taken on during the original building of the church. The architect, Charles Buckler, was a well-known Victorian church designer and the churches of St. Edward the Confessor at Sutton Park, just north of Guildford, and St. Dominic’s Haverstock Hill in London, are fine examples of his work.
The Leslie family who succeeded the Earl of Newburgh had estates in Aberdeenshire, and some family members, including the Countess, are buried here in the cemetery at Slindon church with commemorative headstones in a reddish stone, which is granite from their Aberdeen quarries.
The Rest Cartwright organ was not an original feature of the church but is in perfect keeping.  It came from a Victorian Catholic church, St. Charles Borromeo in Weybridge, which became redundant in the 1980’s. The Victorian Society resisted the move from its original home until persuaded of the Victorian authenticity of St. Richard’s by Father David Sutcliffe, our Parish Priest at the time, who was himself a member of the Royal College of Organists and to whom we owe a debt of gratitude for our organ.
The last Earl of Newburgh is commemorated in a bas-relief plaque on the East wall by the great Danish sculptor Bertil Thorwalden. It is one of only four examples of his work in England, but although he worked in Rome for most of his life, there is an entire museum in Copenhagen devoted to his work and the Slindon plaque is featured in the museum’s handbook. Other examples of his work are in great museums around the world.  The stained glass window, dedicated to the memory of the Countess of Newburgh, depicts St. Richard of Chichester, to whom the church is dedicated, in the left panel, St. Anne in the middle panel and
St. Anthony on the right, reflecting Anne, the Countess and Anthony, the endowing Earl.  The Madonna and Child are in the top circlet of the window. The chalice by St. Richard’s left foot is the symbol commemorating the legend that he knocked to the floor
a full chalice and miraculously none of the contents spilt. St. Richard (b.1197 - d.1253) also features with his friend St. Edmund Rich, Archbishop of Canterbury 1237 to 1240, as one of the figures on the original altar front.
At the time of the sale of the Presbytery, a rare mediaeval cope - a large church vestment - was discovered dating from 1500 and owned by Cardinal Morton. It is now conserved in Arundel Castle and was recently displayed at the Victoria and Albert museum in London, as a fine example of a Tudor church vestment. Hilaire Belloc (1870-1953), the famous Catholic writer, poet, politician, sailor, journalist, traveller and historian had strong connections with Slindon in general and St. Richard’s in particular. His mother brought him to live in Slindon in 1878 at the Dower House thinking that the fresh Downs air would benefit his health. Later they lived at The Grange near the pond, and Belloc gained the love of Sussex which pervades his writings. Later, when first married to his American wife Elodie, they lived at Bleak House in Top Road (on which Cardinal Cormac unveiled a commemorative plaque a few years ago) and, five children later in 1905, when times were hard, he lived at Court Hill Farm below St. Richard’s, before finally settling in Shipley near Horsham.  His mother, Madam Belloc, who was the granddaughter of Dr. Joseph Priestly who discovered oxygen, was buried in St. Richard’s cemetery in 1925.  Belloc’s Catholicism, doubtless fostered with regular Mass at St. Richard’s and supported by great friendship with GK Chesterton, was the paramount influence on his writings and political life for which he was famous in his day.
From the church’s inception, the house beside the church was the Presbytery where the priest lived.  It was originally a cottage or a croft until 1817 when the Georgian house seen today was built on the front.  The house was sold in 1983, since when the priests serving St. Richard’s lived first in Barnham and now Bognor Regis.  St. Richard’s is now part of  Bognor Regis & Slindon.